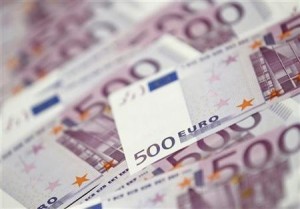 The euro erased earlier advances against the US dollar, plunging to 1-month lows after the comments of the ECB President Mario Draghi.

The euro was heavily pressured following Mario Draghis comments that inflation expectations are well-anchored and inflation may remain low for a prolonged period of time. The ECB President reiterated that the central bank will maintain its accommodative monetary policy, with interest rates remaining at current or even lower levels for a long period of time. He also reminded that the ECB has a wide range of instruments, which have not been used so far.

On Tuesday, official data showed the annual rate of inflation in the euro zone slowed to 0.8% in December, after 0.9% in November, which boosted concerns over the threat of deflation in the common currency area.

The European Central Bank announced a widely expected decision to keep interest rates unchanged at 0.25%. The central bank also kept the deposit facility rate unchanged at zero and the marginal lending rate at 0.75%.

Yesterday, the euro was pressured after a report by Eurostat showed the unemployment rate in the euro zone remained unchanged at a record high 12.1% in November, also in line with analysts’ forecasts. The jobless rate remains largely unchanged for a seventh consecutive month.

EU leaders focused their attention on the labor market as they try to bolster economic recovery form the longest euro zone recession. In December they acknowledged that the unemployment rate remains at unacceptably high levels, mainly among young people, 1-1/2 year after they uncovered an ambitious program worth 120 billion euro to foster the economy and create new job positions.

“The euro-area economy isn’t growing fast enough to significantly reduce unemployment, this isn’t going to change anytime soon, with annual growth rates of about 1 percent this year and in 2015,” said Evelyn Herrmann, an economist at BNP Paribas SA in London, cited by Bloomberg.

According to ECB estimates the euro-area economy will grow 1.1% this year, after it contracted 0.4% in 2013, while a Bloomberg survey among economists predicted that unemployment will average 12.1% in 2014 and 11.8% a year later.

Meanwhile, yesterday, Fed minutes revealed decreasing economic benefits from the bond-buying program, which accompanied with recent upbeat data, increased bets that Fed policy makers might extend reductions in their monetary stimulus program in the near future.

Investors awaited the US Labor Department to publish a report on the number of non-farm payrolls for December, due to be released tomorrow. According to the median analysts’ forecast, employers probably added 195 000 workers last month, down from 203 000 in November. Yesterday, a report by the ADP research institute revealed the US private sector added 238 000 workers in December, the most since January 2012, defying analysts’ projections of a decrease to 200 000 from 215 000 workers in November. The ADP report is calculated according to the same methods the Bureau of Labor Statistics uses and is published every month, two days before the official BLS employment rate statistics.