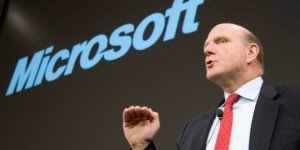 Right after the earnings report, the companys shares climbed more than 5% in extended-hours trading.

“We are seeing lots of consumer excitement for Xbox One, Surface 2 and Surface Pro 2, and the full spectrum of Windows 8.1 and Windows Phone devices,” Microsoft CEO Steve Ballmer said in a statement.

However, globally, PC shipments declined 8.6% in the three months till September, according to research firm Gartner, supporting the clear trend of PCs being overtaken by tablets by the end of 2015.

The hype surrounding presentation of the Xbox One games console, along with further improvement in the PC software business, let company to forecast that revenues would reach $23.1-$24.1 billion in the final quarter of this year. However, the lower profit margins on hardware sales were likely to hold down profit growth in the period, CFO Amy Hoods said.

Microsoft issued the economic report dividing data between consumer and business customers for the first time. Revenues from commercial customers rose 10 % to $11.2 billion. Consumer revenues grew 4% to $7.5 billion as a slump in sales of Windows was offset by improved sales of the Surface tablet and revenues from search advertising. Sales of Windows to PC makers dropped 7%, though this was only half the decline seen in the preceding period and accounted for a large part of the better than expected performance in the quarter.

The figures showed recently by Microsoft and some other companies, which beat estimations on Wall Street, proved investors come to understand the significant impact of big changes in the company’s management and business model.